At a ceremony Thursday, the Hochelaga Rock’s new location along McGill University’s main driveway was honoured, as community members such as Alex “Sonny” Diabo, politicians, school staff and visitors recognized the importance of the historic symbol of cooperation. (Daniel J. Rowe, The Eastern Door)

A crowd of hundreds gathered on McGill University’s front lawn Thursday, September 22 for a ceremony to commemorate the new permanent home for the Hochelaga Rock, just past the main gates of the university.

“I’m almost speechless because we’re so used to waiting and promises, and here it is,” said former McGill professor Michael Loft, who first suggested the rock be moved from its former spot along Sherbrooke Street that few knew about.

The rock was moved over the summer, and the site will be further developed over the year to include benches and other landscaping to draw attention to its presence.

“I was talking to people who worked here for years, and they didn’t know what I was talking about when I mentioned the Hochelaga Rock. That was my clue that something had to give here,” said Loft.

Loft contacted provost Christopher Manfredi last year about moving the rock in the wake of the Truth and Reconciliation Commission recommendations that suggested increasing Indigenous presence at educational institutions.

“Chris Manfredi came through… He looked me straight in the eye and told me it was going to happen and sure enough it did,” said Loft.

“I learned a lot from Mike, and it happened quickly over the summer, but it’s a long process,” Manfredi told The Eastern Door. “I guess we just simply said, ‘let’s do it.’”

The 12,000-pound rock has always been at the university, having first been commemorated in 1920.

“Now here was the site of the fortified town of Hochelaga visited by Jacques Cartier in 1535, abandoned before 1600,” reads the plaque on the rock.

“It contained fifty large houses each lodging several families who subsisted by cultivation and fishing.”

The rock, as Loft explained, was a symbol of acceptance and goodwill by the Iroquois, who helped Jacques Cartier and his men survive the bitter winter, when the Europeans first arrived.

“It highlights the early acts of kindness and it teaches us all about humility,” said Loft.

Previously, the rock was unknown to many students obtaining degrees at the university.

“They did the Discover McGill thing when new students come in the fall and they weren’t going there,” said Loft. “There was no path beaten to the Hochelaga Rock, so I thought, this has to move to a prominent spot.”

It is now unavoidable that students, teachers, visitors and anyone who walks through the gates of the university will miss the rock that stands opposite the monument to James McGill.

“These Iroquoians are just as important as James McGill,” said Loft. “We need to let the world know who was here, and not hidden away, but right up front.”

Yesterday also marked the launch of McGill’s taskforce on Indigenous education and Indigenous studies that will work on attracting Onkwehón:we students from across Quebec to the university and increasing Indigenous faculty, presence, space and support throughout the university.

“It’s embedding Indigeneity into the university,” said Paige Isaac, who is part of the taskforce.

Manfredi spoke about his goal as provost to increase Indigenous presence at the university, and develop a better relationship with communities and Onkwehón:we people.

“I think it’s one of the great challenges facing universities in Canada and Quebec in how we develop our relationship with Indigenous Peoples,” said Manfredi. “I think we really need to build that relationship and make it stronger. I think McGill has the opportunity to really be a leading university in that field.”

A report from the task force is due June 1, 2017, and its work will be regularly published online throughout the year.

The Hochelaga Rock move is the first of two suggestions Loft made to McGill’s provost after the TRC made its recommendations.

“He suggested running it all week,” said Loft. “That was his idea, an even better idea… I’m sure, like everything else, he’s going to try and make that happen.” 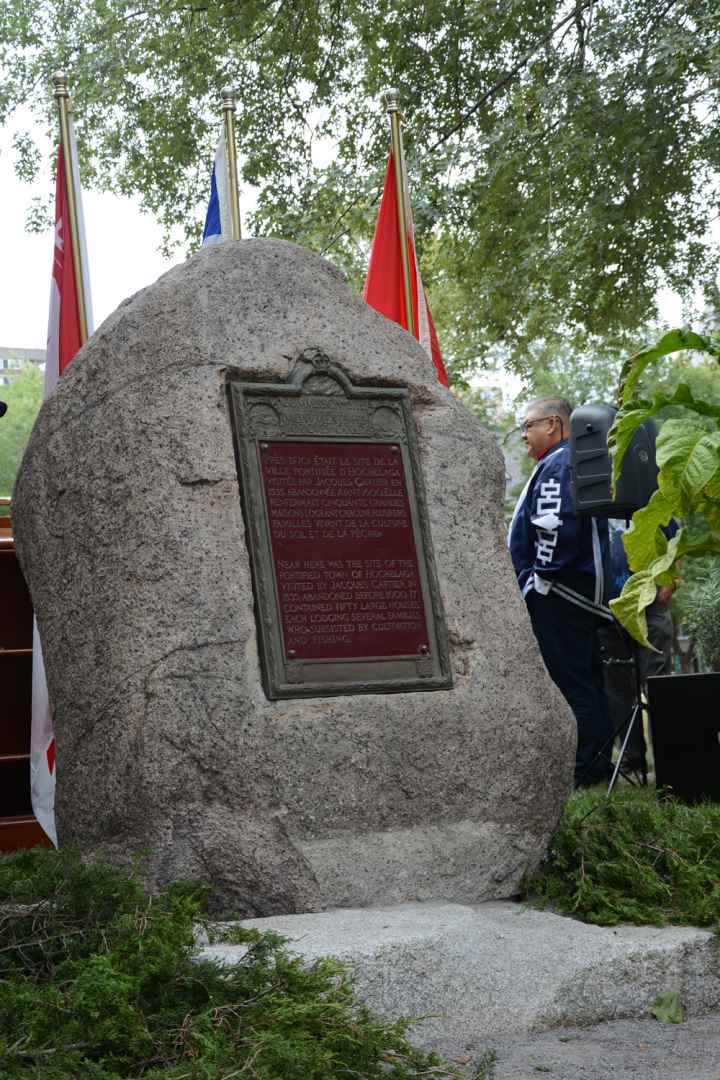 Those visiting or studying at McGill will no longer be ignorant of the presence of one of the most important symbols of the First People’s presence on the island of Montreal, after the Hochelaga Rock was moved to a prominent spot at the university along its main driveway. (Daniel J. Rowe, The Eastern Door)