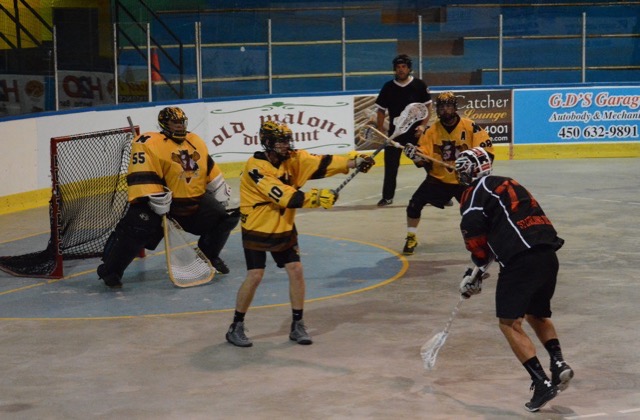 The Kahnawake Mohawks have a commanding series lead in the best-of-seven series against the Capital Region Axemen, with a chance to close the series this weekend. (Joseph Czikk, The Eastern Door)

By: Joseph Czikk, The Eastern Door

Kaheriios Montour sprinted towards an empty net with a minute left in the third period, hoping to ice the game. The Kahnawake Mohawks led 10-9 and the Capital Region Axemen had just pulled their goalie.

Montour shot too high. Seconds later the Axemen’s Nick Sanseverino scored on Mohawks’ goalie Angus Goodleaf. He roared with elation as his teammates swarmed him in celebration.

And just like that the Mohawks and the Axemen were headed into overtime in game two of their best-of-seven series for the Quebec Senior Lacrosse League title.

“A lot of teams would have folded after that but we came back, we showed up in overtime and we picked him (Montour) up,” said Kasey Beirnes, a late-season pick-up by the Mohawks. He’ll head into his 16th professional season with the Toronto Rock this fall.

The night before the Mohawks took game one 9-7 in Ottawa. Saturday night was different.

The Axemen struck first in the 10-minute overtime when Jacob Ruest scored his second of the night on the powerplay.

Then the Pat Saunders Show started.

Arguably the star of the show since he joined the Mohawks, Saunders sniped five-hole on Axemen goalie Chris Chuback on the powerplay to tie the game up. Under a minute later Mark Kirby whipped a lateral pass to Saunders, who fired a sizzling one-timer past Chuback. 12-11 Mohawks.

The home team would get two more goals from Kirby and Peter Jacobs before the final horn sounded, propelling Kahnawake to a 14-11 win and a 2-0 clamp on the series.

“We got down by one in OT and sometimes that’ll kill you, but we came back with three. The guys worked hard and I’m really proud of them,” said Mohawks coach Jamie Batley. “It just showed a lot of character in our team and it showed they’re not going to quit no matter what.”

The matchup between the two teams was their third in the last three weeks, and this one was just as intense as the other two.

As usual the Axemen took liberties on Saunders, hoping he’d get frustrated. They succeeded in the first period when Saunders retaliated with a slash. Geoff McNulty scored on the ensuing powerplay, which made the game 1-0. At the end of the first period the Axemen led 4-2.

The twists and turns of the game made the Axemen’s next two goals seem like fate. First Fred Hartley scored on Goodleaf from long range, then Vradenburg scored as he was falling to the ground.

Things got even more intense with just over three minutes left in the second.

Axemen captain Ian Crawford was called on a minor penalty and was swiftly ejected from the game after he gave the referees a mouthful. Both referees declined to tell The Eastern Door what was said, but they did say it was unacceptable for Crawford to run across the floor screaming at them.

Two minutes after that the Axemen’s James Fawcett laid a brutal hit from behind on Saunders. The play earned Fawcett a five-minute major penalty and the home crowd’s scorn.

As the period ended, Mohawks general manager Greg Horn could be seen jawing with Fawcett as the teams headed to the locker rooms.

“It was a little chippy,” Batley told The Eastern Door. “They were down one game, they wanted to show some muscle and they were doing a great job finishing off their checks. Our guys didn’t let it get under their skin and they responded well.”

Both teams traded four more goals for 10 each before the third period ended. Printup and Kyle Alfred both scored on the five-minute powerplay to make it 8-6, but Hartley and Vradenburg responded for Capital Region. Vradenburg let out a huge celebration when he tied the game up for his team.

With the third period winding down Sose Regis may have made the play of the game when he snatched a pass intended for an Axemen and scored on the ensuing breakaway. That made the score 10-9 just before Sanseverino’s game-tying marker.

Ky Horn said the series is far from over, despite two big wins.

“It doesn’t end until you get four games,” he said. “We gotta treat every game like it’s a game seven. It never ends until we’re going down the handshake line.”

“A lot of teams get up two games to none and think they’ve got it in the bag,” he said. “We need to control what we can control. We can’t worry about who they put on the floor, so we just gotta play the game and do what the coaches tell us do.”

One noticeable absence for the Axemen on Saturday night was fan-favourite Callum Crawford. Sources told The Eastern Door he battled a heavy illness after playing in game one.

Game three goes tonight in Ottawa at 8:00 p.m. while the teams return to Kahnawake for game four tomorrow night, also at 8:00 p.m. Game five, if necessary, will happen in Ottawa on Sunday night.