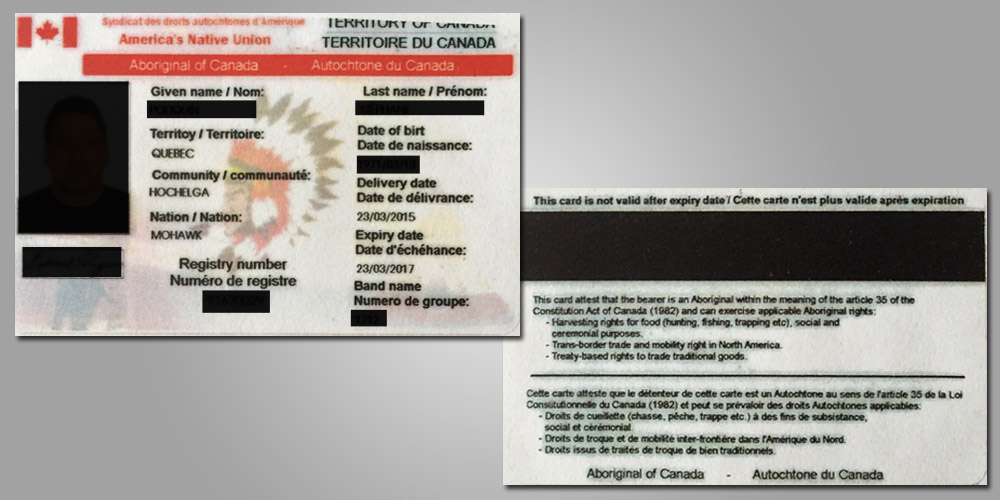 The Mikinak de Monteregie is not the only self-identified Aboriginal community that has caused concern for the Mohawk Council of Kahnawake. Earlier this year, the Syndicat des droits autochtones d’Amérique (SDDAA) were on their radar for trying to use their membership cards for sales tax exemption at businesses in the surrounding area.

A new self-identified Indigenous community that sprung up in Beauharnois is raising eyebrows in Kahnawake.

The Mikinak de Monteregie formed in January with the goal to share and disseminate Indigenous culture.

However, now that some of its 350 members have been trying to use self-issued cards to claim point-of-sale tax exemption at retailers such as Costco, their group’s actions, existence, and leader Lise Brisebois are being condemned by band councils in Kahnawake and Akwesasne.

“I don’t know who the heck she thinks she is because she’s even causing waves for people at Costco – she’s very vulgar, belligerent to the workers,” said MCK chief Bobby Patton about Brisebois. “The Mikinaks themselves are claiming tax exemption but they have no right.”

Brisebois was hesitant to speak with The Eastern Door when she was approached with an interview request via email.

“Are you a journalist paid by Joe Norton, to again, mock me, again and again?” she asked in response to The Eastern Door’s interview request.

She said the Mikinaks are working closely with the Confederation of Aboriginal Peoples of Canada (CAP) and it’s leader Guillaume Carle to bring economic and governmental autonomy to its members.

Patton and other council chiefs got into a heated discussion with Carle on K103 Radio’s Partyline talk show last Friday following a National Post story about Mikinak and Brisebois.

“Kahnawake is the only reserve that is angry at me. I do not sell cards, is Kahnawake going to finally understand?” she said mentioning that the $80 membership fee the organization has goes toward a member’s genealogy or DNA test to prove Indigenous ancestry.

“We are not a reserve, we are a community. We have a card to represent us; we are not status. The Confederation of Aboriginal Peoples of Canada is here to help Indians find their rights,” said Brisebois.

In the case, the Supreme Court declared that Métis and non-Status Indians are “Indians” for the purpose of federal Parliament’s law-making jurisdiction under subsection 91(24) of the Constitution Act.

However, Adam Gaudry, a Métis scholar and an assistant professor in the Faculty of Native Studies and Department of Political Science at the University of Alberta, explained that the ruling does not impact on Métis and non-status Indian eligibility for programs and services currently targeted to status Indians.

“(The) Daniels (decision) is purely based on jurisdiction – it has nothing to do with section 35 and Aboriginal rights. It has everything to do with what level of government is responsible for dealing with Métis and non-status Indian issues,” said Gaudry.

He said Mikinak is a part of a larger phenomenon that is sweeping across Canada post-Daniels. Many groups have been popping up all over Canada, especially in French-speaking areas, attempting to exercise Aboriginal rights based on their ancestry.”

“I don’t think these groups have interpreted it that way,” he added. “A lot of these folks are seeing it as an entry point for them to become Métis, or in the case of the Mikinak – as non-status Indians and access rights.”

Patton said Mikinaks who have been trying to use their cards for tax exemption are creating problems for Kahnawa’kehró:non.

“Community members are getting questioned whether their status cards are the real ones or the fake ones,” he said. “It’s been blown up to a proportion where it is very aggravating and it is starting to affect our people.”

According Gaudry, the impacts could be much larger.

“If left unchecked, it is a threat. It can potentially undermine Indigenous self-determination,” he said. “I think challenging this is important. It seems kind of harmless in some ways, especially when we joke about it, but they’re after something. They’re organizing and they’re organizing for something and don’t seem to care what Indigenous people think and that should be cause for concern.”

The MCK sent letters to Indigenous Affairs and Justice Canada denouncing the group, as well as the Confederation of Aboriginal People of Canada, and requesting that Canada “intervene and quash the fraudulent misrepresentations being made by this group and immediately cease any engagement with these types of illegitimate groups.”

“The Mohawk Council of Kahnawake is prepared to work collaboratively with the federal government to determine a course of action that ensures the title and rights of the Mohawks of Kahnawà:ke are protected from the encroachment of fraudulent groups such as the Mikinak and Confederation of Aboriginal People of Canada,” said Joe Norton in a statement. “We implore Canada to take swift and meaningful action to put a stop to these fraudulent groups before the situation grows any more contentious.”

A similar letter will also be sent to Quebec premier Philippe Couillard to raise attention to the danger this has on the agreement for Kahnawa’kehró:non tax exemption at point of sale.

Norton also told The Eastern Door that he planned on proposing a resolution at last week’s Assembly of First Nations assembly that “deals with fraudulent groups like Mikinak.”

Kahnawa’kehró:non Louis Pronovost attended the Mikinak’s first meeting in January after reading a post about it on Facebook. He told The Eastern Door after speaking to organizers, he was asked to become a member and was even offered a position as their cultural advisor.

He accepted, but ended up ruffling a few feathers at their second meeting in March.

“I told them what they’re doing is sitting under the colonized peoples’ way of doing things. I got there and they were all sitting up front like the band council does. They all had little plaque cards in front of them,” said Pronovost. “They’re a bunch of renegades claiming this, claiming that… I’m just here to tell you that you have to go back to the root source. You have every right to trace your roots, but what you are doing is disturbing and about to roll over the canoe.”

The Mohawk Council of Akwesasne (MCA) also issued a press release on Wednesday condemning the group.

“This self-identified group seems to be claiming to be a Status Indian in order for tax exemption and money-driven motives,” said MCA grand chief Abram Benedict. “While council appreciates the support of any organization or individuals that backs First Nations inherent rights, this group is only trying to benefit themselves -not true First Nations people.”