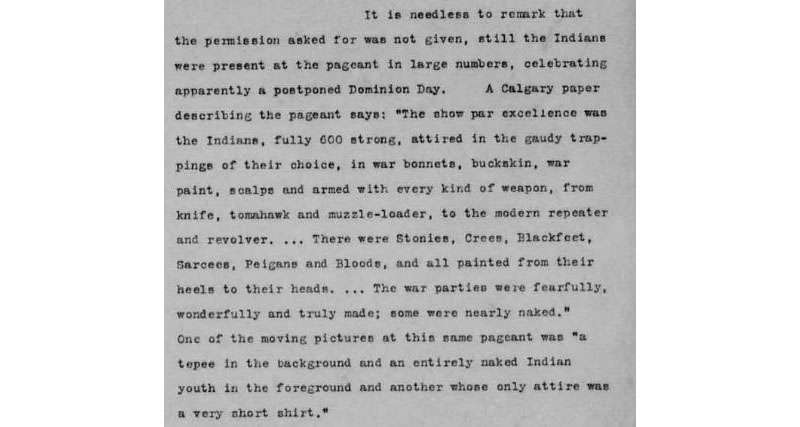 By: Eric Pouliot-Thisdale, The Eastern Door

The “inquisition” on traditional dances, songs and rituals of our ancestors mainly touched the western province up until the mid 1950s since most eastern First Nations were than more likely abiding to the Indian Act and the Christian values, being in touch with Europeans for a longer period.

The European perception of the middle-eastern original biblical texts were introduced to our ancestors since the mid-1600’s in Eastern US & Canada, so the already well established clerical organization prevailed as “moralities” way before the Indian Act’s legislation on dances and rituals for those who followed the missionaries in Montreal, Laprairie, Two Mountains and surrounding areas.

For Kahnawake though, things were very different.

During the railway’s expansion project planned by the Moslon family, Kahnawake seemed to have been a sort of “first North American project” open to the public where dances were not forbidden. For much longer than in most reserves, Kahnawake had some sort of clemency observation project in place with the government and the Jesuits mainly because of their collaboration with the buildings of the bridges managed by the influential Molson family with CP rail.

As a matter of fact, jobs encountered in the 1891 and 1901 census were not only linked with farming anymore, but also with metal casting, metal extraction, welding, mostly linked to the infrastructures of the first bridge, the St. Laurent Railway Bridge erected in 1885-1887. It was an all-steel construction designed to cross the main channel. It was composed of a single track configuration which was introduced by John Moslon in 1852 to be a commercial opportunity between Montreal and New York.

One of the most famous examples of the oppression came from as the section 141 of “Potlatch Law” from 1884 when the federal government banned potlatches under the Indian Act, with other ceremonies such as the sun dance, causing several legal precedents all over Canada.

The potlatch was one of the most important ceremonies for coastal First Nations in the west, and marked important occasions and served a crucial role in distribution of wealth.

Colonists saw the sharing of wealth and food at potlatches as wasteful, but ultimately they knew how integral they were to sustaining First Nations cultures.

Indian Agents and missionaries felt it interrupted assimilation tactics. They wanted Aboriginal people to shift from an economic system of redistribution to one of private property ownership, which seemed impossible to them as long as the potlatch existed.

In 1884 the Indian Act was amended to prevent First Nations people from practicing many elements of their culture.

The focus was on the potlatch, or balhats, in BC and on the sun dance ceremonies on the plains.

The government was trying to force First Nations people to assimilate, to become more like Europeans, and they knew that these practices were part of what made First Nations cultures strong.

The main effect in the Babine Lake area was that the balhats were practiced in secret for many years, but the system remained strong an alive through all of that persecution.

In 1889, the area around the upper Skeena, centred on Hazelton British Columbia was designated the Babine Agency. Indian Agent R. E. Loring was sent to oversee all of the First Nations people in that area.  This was a major step in increasing interference by the government in all parts of First Nations life in the area. It happened at Kit-Au-Max nation, a Gitksan village at the Forks of the Skeena River.

Here are a few correspondences explaining their situation then, taken from a document found at Library and Archives Canada, from Babine Agency entitled: Correspondence regarding the impediments to enforce law and order among the Indians by Acts of an Indian, Louis, employed as a constable by captain Fitzstubb, stipendiary magistrate at Hazelton. One major difficulty was to convince the Indians to give up the potlatch.

From October 12, 1889, the Indian Agent R. E. Loring wrote to Hamilton Moffat, Superior of Indian Affairs from Victoria BC, informing him of a situation involving a group from Kit-Au-Max rebelling against the restrictions brought up concerning dances.

It reads, “Sir, I must apprise the Department of the results after having has a council with the Kit-au-max tribe on the evening of the 5th day of the present month. The feeling amongst them I found to be in the highest degree in favor of the law and regulations laid down in my instructions.

“They conceded to everything, even to giving up the Potlach. But the speaking of an Indian by the name of Louis, employed by Captain Fitzstubbs, as constable, turned the seal in opposition to the abolishing of their old customs. He spoke before me and all assembled as follows:

“My uncle is the head chief of the Kits-Pioux, the same told me to oppose any new law that should come to this country. That they had their own laws and that they wanted no others. I know the law is against stealing etc. I am an officer of the law myself. We do not want anyone to come to Kits-pioux with any new laws from the Government. How would the Government like to have their laws locked-up as they do ours?”

He kept on explaining to his superior that that they should give clemency, since their culture was doomed to extinction within two to three years.

“Then I told him it was for those under oath to uphold the law, to help enforce and not to obstruct it. […] Wednesday the 9th, I assembled the tribe in council, was eagerly listened to, as the presence of my wife inspired them with confidence, despite the alarm given.

“They consented to send their children to school, stop eating dogs and everything else mentioned, but to give up the Potlach they could no, as they were advised by captain Fitzstubb’s constable that the law had no power to punish it as an offence and that they could go on, as they had been doing. […] Indians asked me to write to the government to be allowed to retain the custom of potlaching for a year or so more and I promised to do so.

“I ask for the privilege to use discretion in this matter, as to enforce the law would cause trouble and expense.

“I hope the department will coincide in my views or the present, as the customs has the tendency to die out in the course of 2 or 3 years.”

He then brought up his last “convincing tips” to his superior writing:

“To encourage the Indians and inspire them with confidence, could be greatly assisted by helping them in tilling of their land. I promised them, that I would ask the Department to send to me two light plows as the soil is rich and clear. The use of a plow for 4 or 5 days in each village would accomplish better results than months of the tiresome primitive way of doing.

“Ponies are in every village and would be put to harness. I will take the greatest interest in improving their present conditions. The Indians are great imitators; all they require is to be shown.”

“With regard to the request made by the Indians through Agent R. E. Loring to be allowed to retain the custom of Potlaching for a year or so more, and the hope expressed by agent Loring that the Department will be lenient (permissive) for the present as the custom has the tendency to die out in the course of two or three years, the undersigned begs to state that, as to te Department allowing the Indians to retain the custom, it is quite out of the question as the celebration of such feasts is declared to be misdemeanor and punishable as such and any person who encourages either directly or indirectly the celebration of such a festival is guilty of a similar offence. But the enforcement of the law in regard to this matter properly belongs to the provincial authorities. Vankoughnet”

Of course, obviously, the clerical class was worried of such suggestions of clemencies suggested by captain Fitzstubb. Jo Fields, the superior of the Church Mission Society, expressed in an undated letter to Fitzstubb from October 1889 which went:

“Dear Captain Fitzstubb, […] in reviewing the history of the Skeena District since your appointment as Stipendiary Magistrate and Gold Commissioner, some eighteen months ago, I feel amazed at the change that has come over the place.

“The insulting defiance of the law, the hostile and threatening attitude of the Indians, the danger to which life and property were exposed, the daily commission of crime without fear of punishment have given place to respect for and submission to the wishes of the Government, to a civil and even conciliatory bearing of the people towards the whites, to a general feeling that life and property are as safe as they could be anywhere, and to the almost entire disappearance of gross crime and the reduction of petty misdemeanors to a minimum, and this has all been affected by the wise policy which while it insisted on the acknowledgement of the power of the law, succeeded in avoiding collision with every section of the community, and in winning for yourself the respect and esteem of all.”

Later, in 1909, in Manitoba, David Laird, the Indian commissioner sent a letter to Frank Pedley, the Deputy Superintendent General, writing:

“The best means of preventing Indians from attending and taking part in pageants and sports in the summer season, and thus neglecting necessary work on their reserves, is a very difficult question.

“The Department of Agriculture in the Province of Manitoba, Saskatchewan and Alberta, whose co-operation was asked by this department to induce agricultural societies to discontinue the employment of Indians to give at fairs as attraction dances and other exhibitions peculiar to aborigines, replied in favorable terms; but the results has been somewhat disappointing.”

“It is needless to remark that the permission asked for was not given, still the indians were present at the paegent in large numbers, celebrating apparently a postponed Dominion Day.”

He mentioned the Calgary paper which described the paegent:

“The show par excellence was the Indians, fully 600 strong, attired in the gaudy trappings of their choice, in war bonnets, buckskins, war paint, scalps and armed with every kind of weapon, from knife, tomahawk and muzzle-loader, to the modern repeater and revolver. There was Stonies, Crees, Blackfeet, Sarcees, Peigans and Bloods, all painted from their heels to their heads. The war parties were fearfully wonderfully and truly made; some were nearly naked.”

He also wrote what he described as: “One of the moving pictures at this same pageant was a teepee in the background and an entirely naked Indian youth in the foreground and another whose only attire was a very short skirt.”

An oppressive section from Indian Act was amended and taken out in 1951, traditional and ritual dances were no longer banned.

The historical recognition occurred with Canada’s commitment to the United Nation’s Universal Declaration of Human Rights, which led to the revision of the Indian Act in 1951.

What motivated the move was mainly the particularly troubling reputation of Canada towards the Aboriginal peoples’ contribution for the participation as First Nations soldiers in the Second World War highlighted in Canada.