Skip to content
You are here
Home > News > Our History: Inventory of Spanish residential school explored 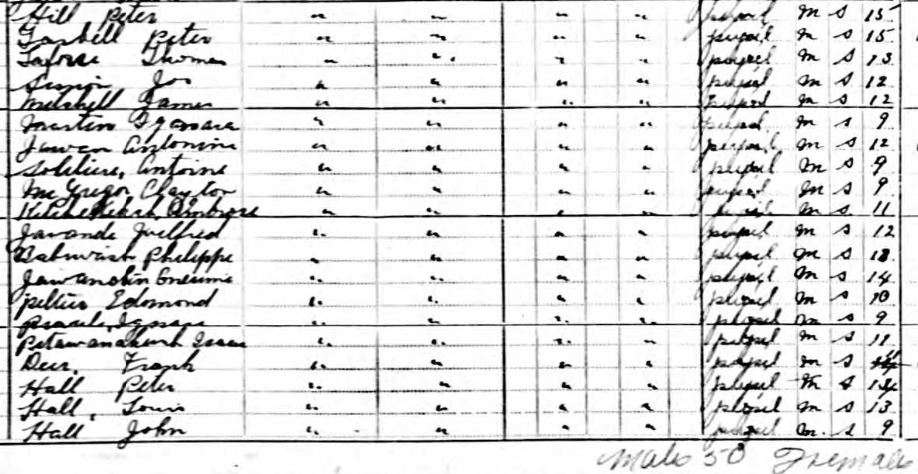 The Spanish Indian residential School was on the north shore of Lake Huron. The school was half a mile south of the village of Spanish on the Canadian Pacific Railway branch line from Sudbury to Sault Ste. Marie.

All the students from Akwesasne, Kanesatake and Kahnawake are mentioned in the residential school as “pupils” of the religious. The man responsible of the census was Georges A. Thorburn, from a family from Edinburg in Scotland very involved in the industry related to the developments of the CP Rail Company in western Canada.

Most people of European origin were recorded in the first eight pages. They were mostly from Europe, Ontario and Quebec but several were Irish, Scotch, Syrians, Russians and also Dutch. They were labourers, students, sawyers, store owners and employees, merchants, farmers, employees from CP RB station and school teachers.

The Catholic Church owned and managed the boys and girls schools. The operating costs mainly came per capita grants coming from the Department of Indian Affairs. The annual per capita grant was $100 in 1916, for 133 students, and was increased to $110 in 1917. Part of the operation costs came from the food produced at the schools.

The majority of students at Spanish were from communities from Manitoulin Island and along the north shore of Lake Huron and Lake Superior. The extended areas were from Parry Sound in the southeast and the Ottawa Valley in the East, to Marathon in the west and to Chapleau, Temagami and New Liskeard in the north. A small number of students came from communities in Quebec, Walpole Island, Akwesasne, Kahnawake, Kanesatake and from Nelson House in Manitoba, and from western James Bay.

The food produced was: eggs, chickens, beef, veal, potatoes, turnips and carrots. The nuns and sisters didn’t receive salaries but certain expenses were covered from the school funds, which also occurred at the boy’s school.

The food for breakfast was porridge, milk, bread & butter; for dinner: meat, potatoes, bread. On Fridays, they had macaroni instead of meat for lunch, for supper: beans or corn porridge, bread, and tea or milk. Butter was given only once a day. The bread was a type of black bread made from a formula obtained from a medical man, know to them.

Some parents complained about the food so a sample of bread was taken and sent for analysis to the Department of Trade and Commerce. The subsequent report indicated a nutritional value of 1188 calories per pound was “just a nutritious as a finer flour,” and even though the bread was “slightly sour,” that didn’t indicate that it would cause ill death.

In winter 1915-16, the Department was concerned about the “apathetic attitude of the Indians to school matters” and decided to do a “surprise inspection and examination of the school work at the convent (girls school) in order to determine just where the fault lies”. An official was sent to the school to “test the efficiency of the system.

The boys and girls at Spanish formed the largest Indian Residential School in Ontario owned by the Catholic Church. Both boys and girls schools were three-storey brick and stone structures with full basements.

In 1917 the principal in charge sent a letter to Duncan Campbell Scott, the Indian Affairs Superintendent (1913-1932), suggesting that the Department buy the boys and girls schools and hire the priests, brothers and sisters to run it, “as you are doing for three Western Industrial schools owned by the Oblate Fathers.” was it written.

Scott replied that the Department could not buy the schools at that time as they were “not understanding any new building operations or the acquirement of any establishments.” So the Spanish schools continued to be owned by the Catholic Church.

When the school first started, the students attended classes for half a day and did work around the schools, farms and lands for the other half day.

An inspection report from 1920 indicates that: “The boys take turn at the outside work. 8 are required for milking. 4 work at shoe making and repairing. 3 work at carpentering. In summer some work in gardens, and 4 or 5 on the farm. The work is done during 1 hour after breakfast and 1 hour before supper. I do not think they are overworked. The older boys help with the trashing”.

For instance, in 1926, $2000 was voted for repairs and maintenance for the school as the “institution has received very little assistance from the Department, other than per capita grant, since it was opened in 1913.”

The money was used to install Delco units providing electricity.

All the girls attended domestic science classes as the Sisters were preparing them to obtain jobs “as domestics among white people.”

In order to do this, the Sisters put a request to the Department in 1939 for a large number of supplies to be used in the domestic science class.

In 1938, the Department approved repairs and equipment funding from Spanish and eventually an annual allocation was granted from a Parliamentary Vote, which was divided for the schools maintenance and repairs.

In 1938 an Order of the Council approved a $35,582 for “new work repairs and purchase of equipment” for the Spanish Residential School, the Moose Fort Church of England Residential School and 22 other church-owned schools in the western provinces and North-West Territories. This budgetary project kept occurring afterwards. However, the Spanish School kept a deficit as the per capita grants were insufficient to cover all fees related to the school.

In the early 1940s, the girls started attending classes on a full day basis and “they tested very well on the Achievements Tests administered” during an inspection in 1948. A companion report for the boys indicated that due to the half-day system with the older boys, “the Achievements Tests compared only fairly well.”

However, the inspector believed that the boys would do much better and make more rapid progress since half the half-day had been abolished and the boys were in class for a full day.

It consisted of a three-storey building built from stones and a basement which was used for the dormitories, classrooms, dining room, kitchen, laundry room, furnace room and reception area for the boys. There were also barns, stables, saw mill, planning mill and several annexed buildings used as store rooms all on a 600 acre parcel of land.

Before 1932 it was managed in collaboration with the reverends and missionaries except for the years between 1932 and 1934 when it was managed by sister Louise Bonnet, and from 1934 to 1948 when sister Zoe James managed it.

When the school was renamed St. Charles Garnier (1930-1958) the responsible managers were:

The St. Joseph’s School for Girls (1913-1960) was located on a 400-acre lot adjacent to the one used for the boys. It was also a three-storey building with a staff of 10 including a Native student who returned after post-graduate studies to devote time to them to help spiritually and academically.

The religious order of the Daughters ran retreat houses and the home for girls. The St. Joseph’s school at Spanish was the only school of its kind managed by the Daughters of the Heart of Mary who operated on six continents at the time.

The 1921 census also exposed the teachers among the population’s demographic datas:

The several Natives noted were listed as being from Canada in the “origins” column, others have Ontario and others Quebec, and so several important mistakes were made in this column. All girls are registered from Ontario, but several are from Kahnawake, which makes the information “from Ontario” irrelevant for many on the last 2 pages for this column.

Here are a few examples of how the Mohawks present in this census were identified from the previous 1911 census of Kahnawake.

In the 1921 Spanish Residential School census

Next week, additional details about the 1921 Spanish census and analysis of the 1911 census of Algoma east, Manitowaning Indian reserve, of Wikwemikong which was the 1st emplacement of the residential School before Spanish in 1911.