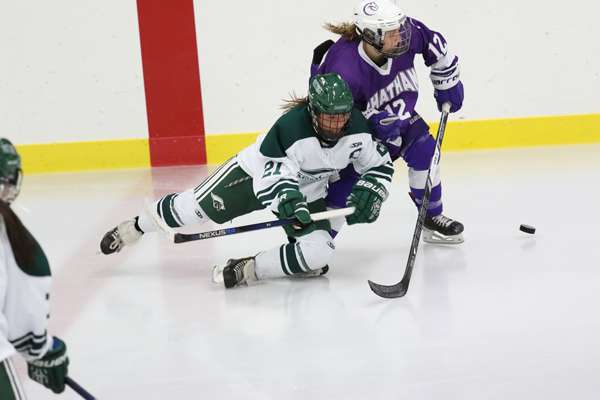 Kahnekaroroks McComber will return for one last season with the Morrisville Mustangs next season, as she wants one last shot at a CHC championship. (Courtesy Steve Samoyedny/Four SeasonsPhoto)

“We need to score,” the 21-year-old Junior told The Eastern Door last week.

After going three straight games with an 18-0 goal differential, the Mustangs were shut out 5-0 in the NCAA DIII Colonial Hockey Conference semi-final game to eliminate Morrisville from the playoffs.

“It was just a chippy game,” said McComber. “We didn’t capitalize on our opportunities when we were up a man, but it was a good game.”

Staying out of the box was an issue for the Mustangs all game. Mustang Stephanie Strymecki picked up an interference penalty just over half way through the first period, and Gull Lexi Klein scored on the ensuing power play.

Kelley Graham then picked up a hooking penalty under a minute later, and again the Gulls scored.

Endicott scored even strength in the second period to make it 3-0, followed by a pair on the power play in the third to ice the game.

The disappointing end did not take away from the Mustangs’ quality season, according to McComber.

The program is in its rookie year at the University of Vermont, and plays with just two lines. Next season, McComber is excited to regroup with the team and hit the season flying.

“We need to come out hard next year,” she said. “Hit pre-season hard and make sure we continue to work hard throughout the season and score some goals.”

She added that coach Melissa Lomanto is looking at adding another line and bringing in more defence to give the team some added depth.

The team already has some of the tangible assets that many struggle to find.

“We all get along really well, and we have great team chemistry,” said McComber. “Once we bring in freshmen, we need to get them in the mix right off the bat. We move the puck really well and the systems coach has us doing have been quite effective.”

McComber transferred from Norwich University at the beginning of the season, and is the oldest player on the team. Her experience and leadership was valuable for the younger players on the team.

“She was very helpful and provided great advice from her experiences when we needed it,” said the freshman forward Strymecki.

For McComber, the decision to transfer to Morrisville was a good one.

“Yes it was,” said McComber. “I am coming back next year to finish my senior year of hockey. I want that CHC championship.”