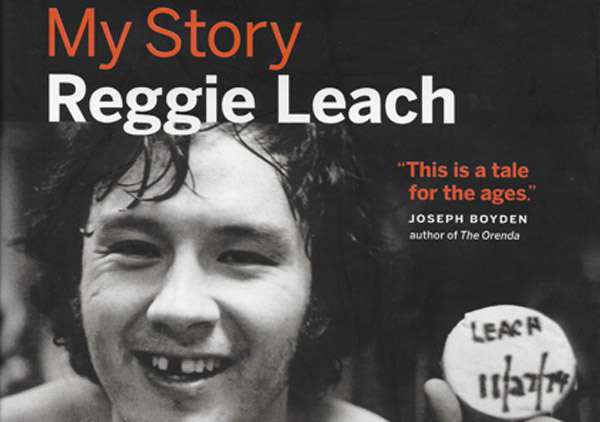 They were the years where hockey players had few teeth and epic moustaches; hair flew freely sans helmet as nature intended, and a team from Philadelphia in orange and black won back-to-back cups and were one of the dominant teams in the NHL.

Indeed the sentence “Philadelphia Flyers win the Stanley Cup” was not something to laugh at.

The Riverton Rifle: My store – Straight Shooting on Hockey and on Life (Greystone Books, $32.95) chronicles the NHL in the 1970s through the voice of one of its pivotal players of that Flyers generation: Reggie Leach.

Leach, the Riverton Rifle, is a member of the Berens River First Nation, an Ojibway community on the eastern shore of Lake Winnipeg, and he worked through junior and NHL ranks to land on legendary LCB line along with hall-of-famers Bill Barber and Bobby Clarke on the infamous Broad Street Bullies Flyers squad.

The line ranks number one on the Bleacher Report’s top lines in Flyers history, was the heart of the Broad Street Bullies, and led the team to a Stanley Cup in 1974 and 1975.

Love ‘em or hate ‘em, the bullies were a force to be reckoned with. If you played or cheered against the orange and black, you’re probably in the latter category.

Leach’s autobiography, however, is not what you may expect.

Leach, never the enforcer that some of his teammates were, writes in a thoughtful and humble way, and is always quick to point out positive points in every situation.

Whether it was the team’s reputation, games against the USSR’s Red Army squad, getting stuck on the bench, or racist taunts, Leach looks to grow through negativity.

Consider his reflection on the racist taunts he, like many Onkwehón:we hockey players, faced.

“From then on, I took those insults as compliments,” writes Leach. “I made the choice to turn a negative into a positive, and that approach has served me well over the years. If you view things in a positive light, and see the silver lining when times are tough, life is much easier.”

Leach is a very understanding man, and writes in the straightforward way one would expect from the winger who holds records for goals in consecutive playoff games (10), goals in a playoff game (five, tied with four others), and goals in a playoff season (19, tired with Jari Kurri). He is the only non-goalie to win the Conn Smyth for playoffs MVP in a losing cause, which he did in 1976 against the Montreal Canadiens.

Other documentaries or books on the Broad Street Bullies focus on their intense toughness, fighting prowess, fearsome reputation and inspiration to the city. Leach does this, but spends more time on the family atmosphere on the team, particularly his lifelong brotherly friendship with Clarke.

In the same breath, Leach knows full well the attitude others have about his squad’s reputation, and had a line for Flyers critics.

The book provides the kind of behind-the-scenes anecdotes about the team one expects from a first-person memoir, but shows the Flyers’ bruisers as dedicated teammates that stood up for each other and acted like a family. His descriptions of coach Fred “the Fog” Shero and goalie Bernie Parent are particularly enjoyable.

Leach eventually declined as a player, and writes candidly about the years post-LCB line, as well as the decisions he made as a veteran player.

“I made some dumb choices in those years, but that is what life is all about: you screw up, you make sure you learn from your mistakes, and you move on,” he writes.

Leach struggled with life after the peak of his career that involved binge drinking, depression and a broken marriage. The bottom-of-the-barrel pages set up a satisfying finale where Leach writes about his journey to sobriety and becoming a positive role model for Native and non-Native communities alike.

He works with his son Jamie Leach (also a former pro with the Pittsburgh Penguins of the early 90s) to run the Shoot to Score hockey school that works to steer Indigenous youth to make positive life choices.

“I believe that everyone has a talent, skill or gift in life,” writes Leach. “It is up to everyone to find that gift as your individual truth. My gift was my hockey skills, which I sharpened every day through practice.”

Those wanting to meet Leach have a chance March 5 when Leach will be in Akwesasne for an alumni game with other past Native NHLers. What a perfect opportunity to tell him what you thought of his book and get it signed! Tickets are $20 and available at Akwesasne Sports on Highway 138.