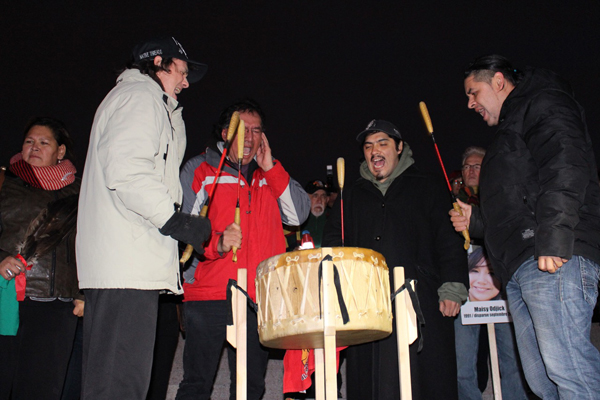 The Buffalo Hat Singers, a Montreal-based group, perform at the opening of the vigil to support Native women in Montreal’s Place des Arts on October 29. (Kate Sheridan, The Eastern Door)

By: Kate Sheridan, The Eastern Door

A crowd gathered around the stone stairs near the contemporary art museum at Place des Arts at dusk last Thursday, October 29, at a vigil to support missing and murdered Native women. The attendees brought signs, flashlights and a message for the government: violence against Aboriginal women must stop.

Melissa Mollen Dupuis said she organized the event for her daughter. “It’s a real life situation for me, for my baby,” she said. “I’m scared for her every day, because it could happen to her.” Dupuis is affiliated with Idle No More Quebec and served as the event’s MC, calling up speakers one by one.

Ellen Gabriel, an activist from Kanesatake, was one of the speakers. The event could bring people together and educate them about the issues faced by Native women, she said, especially issues with the police.

The issue was at the forefront of many attendee’s minds; less than a week before, Radio-Canada’s Enquête program had aired the stories of Indigenous women in Val d’Or who claimed that provincial police officers sexually assaulted them. Eight officers are involved in an investigation into the issue, which is being led by Montreal police.

“During the (Oka) Crisis, the SQ were a law unto themselves,” she said. “I think it’s also important to put pressure on government – if you just give them a slap on the wrist, it’s condoning this kind of action and it’s not going to stop. We need to find some solutions,” she said, including an education program for all officers.

As the last bits of daylight faded, people brought out torches, candles, flashlights and even cell phones. Plenty of camera flashes also illuminated the speakers, noted by Gabriel during her speech.

“This should not just be a one-shot media event. This has been a problem going on for generations!” Gabriel said. “We have been marginalized, and treated as less than human, and that is not acceptable,” she added. “This should just be the beginning of putting pressure on government.”

The crowd was diverse, in age and background. Kay Aubanel, a volunteer with Amnestie Internationale’s Rive-Sud chapter, was handing out placards just before the vigil started.

“It’s important for us because we’re always focusing on human rights abuses, and for a long time, it was never touching anything in our own country – it was always elsewhere,” she said. “If there’s one big issue of abuse, of two-tiered citizenship, it’s right here at home.”

Men’s role in moving towards a safer future was also discussed in speeches and in the crowd. “As men it’s really important to support women in their own empowerment and to end violence against women,” said Ivan Escobar, a student at UQAM who volunteers with Native youth programs.

“I think men, we often tend to not talk about this issue and just forget about it.”

Many lauded the courage of the women who reported their abuse in Val d’Or while criticizing the systemic issues that have lingered.

“Today, we are going through a crisis,” said Ghislain Picard, chief of the First Nations Assembly of Quebec and Labrador, though he noted that the responsibility for the safety of Native communities was shared by the government and by leaders who needed to engage the government.

Prime minister Justin Trudeau was sworn in Thursday, after campaigning on a platform that included the establishment of a public and national inquiry into missing and murdered Indigenous women and the enactment of the recommendations of the Truth and Reconciliation Commission.