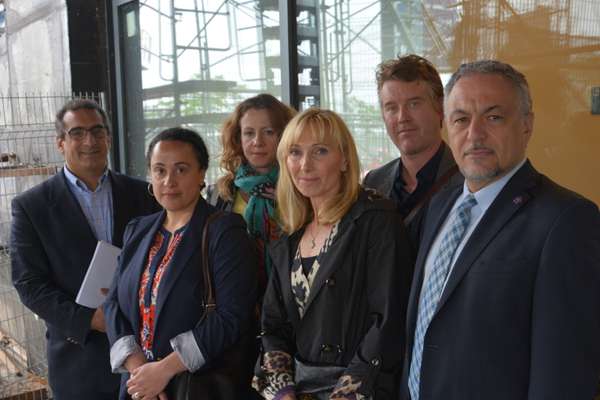 The Foundation for the Compulsory Study of Genocide in Schools is hoping to pressure the government of Quebec to make mandatory the study of genocide including Residential Schools in the province’s textbooks. (Daniel J. Rowe, The Eastern Door)

Following an unsuccessful attempt to convince the government of Quebec to make teaching residential schools and other genocides mandatory in secondary schools in the province, members of the Foundation for the Compulsory Study of Genocide in Schools forwarded a petition on the government’s website to push the issue this week.

As reported in The Eastern Door in June, the group intended to follow up on multiple public endorsements from politicians and public figures in Canada – including Quebec’s premier Philippe Couillard – of the Truth and Reconciliation Commission’s 94 recommendations by urging Quebec’s ministry of education to follow BC’s lead by instituting genocide studies, including residential schools, in the province’s text books.

BC mandated that residential schools be taught beginning in grade five.

Catherine Dupont, director of general youth education at the ministry, said it would not mandate it at the first meeting, and that the decision to teach about Canada’s residential schools policy was up to the teachers.

“After we met with the chief advisor to the ministry of education Mrs. Catherine Dupont (Francois Blais), it wasn’t a very successful meeting,” said the group’s spokesperson Heather Ancliffe. “We figured we would take it political.”

After consulting with a political adviser, the group decided to go directly to Couillard through member of the national assembly David Birnbaum, who supports the initiative.

“We met with David Birnbaum once again, and sent a petition out to the national assembly,” said Ancliffe. “We’re trying to gain as much support as possible to make this cause more aware to the masses, and then bring it up with the minister of education once again, and to Mr. Couillard’s attention.”

A petition is now posted on the Quebec government’s issue titled: the “Petition: Compulsory study of genocide in high schools.”

One point reads, “considering that significant numbers of Quebec students have no knowledge of genocides, past or present, including the Holocaust, the Armenian genocide, Rwandan genocide and the cultural genocide of our First Nations.”

“Considering that racial and cultural intolerance and discrimination are the preconditions associated with the beginnings of genocide, defined as the systematic destruction of racial, ethnic or cultural gap,” the petition reads.

Those wanting to support the initiative can fill out the information electronically on the Quebec government’s website.

“We, the undersigned, ask that the National Assembly and the Minister of Education, Higher Education and Research act to make the study of genocide compulsory in all Quebec high schools as a means to creating a tolerant and peaceful society which is accepting of all cultures and regions,” concludes the petition.

Since the group started its campaign, which was also reported in the Montreal Gazette, response has been overwhelmingly positive.

“Everybody’s very supportive,” said Ancliffe. “People agree that it’s something that should definitely be in the education system in terms of genocide education in general, and especially what’s happening with the residential schooling system.”

Couillard said in June that he agreed with the term ‘cultural genocide’ to describe residential schools, and that “scars” remain as a result of the schools that need to be acknowledged.

“We’re trying to use that as an entry to make all genocide education taught in the education system in Quebec High schools and follow suit of British Columbia,” said Ancliffe.

The group was on K103 in Kahnawake this summer, and is looking to continue the relationship with the community.

“We really want the support of the Aboriginal communities, as it’s really important to have their stories told. It’s part of our history,” said Ancliffe.

The reason for pushing the issue is a no-brainer for the group that aims “to pressure the federal and provincial governments to include the study of genocide as a compulsory subject in high schools across Canada,” according to the group’s website.

“There’s a need, there’s a want, and it’s just a matter of making it a mandate to have it mandatory, and make it a part of our system,” said Ancliffe. “Quebec history doesn’t start when Quebec was founded. The world goes beyond that.”