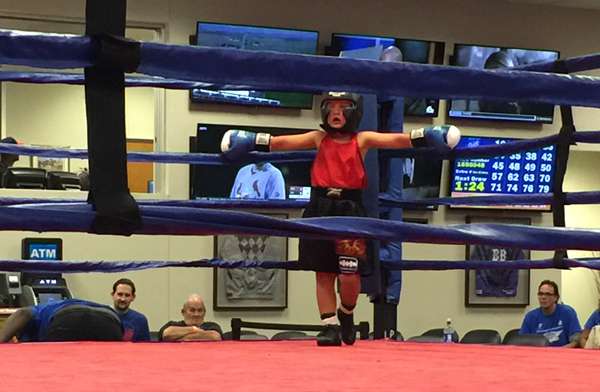 Shatekaienthokwen Van Dommelen is following his father Art’s passion and has developed into a hard-hitting quality boxer at the ripe age of nine, at 75 pounds. (Courtesy Kaiatanoron Mayo)

A weekend in New York was all about the ring for nine-year-old Shatekaienthokwen Van Dommelen. The short but strong 75-pound boxer took in the World Boxing Championship fight whose main event featured hard hitting bulls Gennady “GGG” Golovkin and David Lemieux at Madison Square Garden in Manhattan, before stepping into the ring himself Monday night in an exhibition fight.

Van Dommelen had fought the quick 65-pound fighter known as “Speedy” once prior and got another round with his rival after no one in the 75-pound category stepped up to fight.

“I fought this kid once and he was way too fast for me, but after that I trained even harder,” said Van Dommelen. “It was hard still, but it was only an exhibition.”

The fight did not go in his favour, but, as it was an exhibition, and there were no other fighters in his weight class, Van Dommelen moves to 2-0 in the four-bout New York State Championship tournament. His next fight is November 9.

Fighting runs in the family with Shatekaienthokwen taking after his father Art Van Dommelen, who fought his whole life.

“I am really proud of him,” said Art. “He trains hard, he is brave in the ring and has potential to go far. I get nervous every time he fights. It’s so intense. It feels like I’m boxing again.”

Seeing professional fighters on Saturday night gave Shatekaienthokwen some tips for his own bouts.

“The fight before David Lemieux, there was this flyweight fight and the guy was only 111 pounds and he knocked out the guy, they stopped the fight,” said Shatekaienthokwen. “He lost the first round, but he won all the other rounds.”

The fight in question featured undefeated Nicaraguan flyweight Roman Gonzalez beating Hawaiian Brian Viloria in the ninth round with a TKO.

In addition, the young fighter saw similarities between himself and the two main event fighters.

Golovkin beat Lemieux in a TKO in the eighth round.

Shatekaienthokwen also plays football and lacrosse, but prefers boxing above the other two. His twin brother Shatekaienthon boxed for a while, but stuck with lacrosse and football in the end.

His mother Kaiatanoron Mayo was uneasy at first watching her baby boy in the ring, but has grown to appreciate his love for the sport.

“I had a hard time; it scares me, but to watch him and to see his passion, he gets this look in his eyes, and he’s awesome,” said Mayo.

“It’s all heart, and what’s nice is he knows what he’s doing is a sport and it isn’t about hurting anybody. He still has a pure heart. There’s no malicious intent behind it, and it’s not used in a negative way.”
Mayo still worries about accidents, as any mother does, but appreciates the support and excitement around the sport’s fans and participants.

Getting ready for next month, Shatekaienthokwen knows he needs to do one thing: “train a lot.”