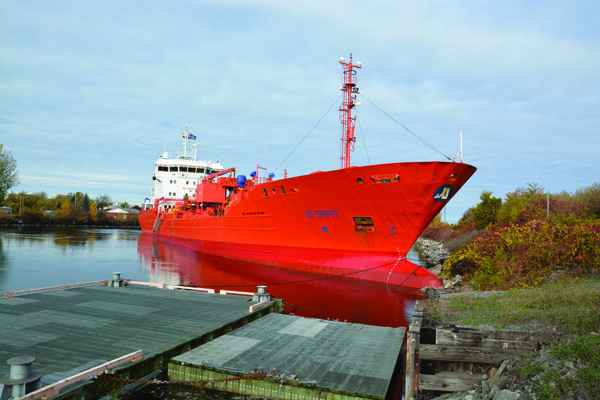 A tanker carrying raw alcohol lost power and hit the North Wall Monday morning that drew crowds of onlookers to check out the scene. No one was injured and the cargo remained in the ship’s hull. (Steve Bonspiel, The Eastern Door)

In the wee hours of Monday morning, some community members noticed a strange humming emanating from the water.

It turns out it was Jo Spirit, a commercial ship carrying crude alcohol, making its way towards the Cote Ste. Catherine locks when a sudden power failure forced it into the North Wall on the St. Lawrence Seaway, just short of the emergency docks.

“It was heading back towards the ocean and is a tanker carrying some type of alcohol fit for human consumption.”

Begora said because it is a double-hulled ship, “You have the outer skin and the inner skin, before you get to the liquid payload,” meaning there was never any real danger because neither of the layers were breached.

As part of operational procedures, Begora said the SLSMC does not release information concerning the departure point and destination of ships within the St. Lawrence system “for trade purposes.”

The general manager for Emergency Preparedness and Planning with the Community Protection Unit was on scene shortly after 7 a.m. to survey the situation, after Animal Protection officer John Deere called it in.

Kellyann Meloche’s priorities when assessing a scene are: Life, Property and Environment, none of which were in danger.

“He (the captain) wasn’t able to get power back in time to maintain the course so he veered off course and hit the wall,” she said. “They told me there was no breach of the ship, egress into the water, or pollution going into the seaway – and the commodities they were carrying was alcohol – I had all that info before even getting on scene,” said Meloche.

The SLSMC called the Peacekeepers at 5:57 a.m., but “I don’t know why I wasn’t contacted after that, at least for information purposes, but that’s an internal piece that we’re going to have to work on, in terms of protocol,” said Meloche.

Ships have collided or hit the wall on numerous occasions over the years, including two years after Meloche started, in 1995, her first major call involving a polish ship that lost power and hit the wall.

If something major happened, according to Meloche – say a leak or any kind of breach: “Our environment personnel would have been on scene as well and we would have had to get booms out into the seaway to keep it contained to one area,” she said.

That means a spill of any kind – oil, alcohol or anything foreign to the seaway environment.

Transport Canada arrived on site to meet with the captain and owner, and after an inspection was carried out, a re-float plan was initiated before the tugboats moved the ship back into navigable waters.

“We have a system of alerts,” said Lesley Husbands, communications advisor with Transport Canada. “The Canadian Coast Guard sends out an alert and we are advised by them when there’s an issue. Depending on what it is, there’s a lead on the file. Sometimes it’s us, other times it’s the Coast Guard through Fisheries and Oceans, it depends. Marine is pretty complicated.

“There are at least three levels of laws that apply to the marine setting – national laws and international laws, and then depending on the body of water and so forth,” she said.

“Transport Canada takes this kind of incident very seriously,” said Alex Desjardins, another media relations person who followed up with The Eastern Door.

“Following a thorough inspection of the Jo Spirit, Transport Canada determined that the cause of the grounding was mechanical. In addition, an underwater inspection by divers was performed to ensure there was no damage to the hull,” he said.

At 4:15 p.m., over 12 hours after it ran aground, the ship was back on its way towards the Cote Ste. Catherine locks.

Meloche said six ships were “in holding” in the meantime.

“You’re backing up each of your delivery times but nothing can go through until that one was cleared.

“We had a really good working relationship with them (SLSMC) and they offered all of the information when asked and didn’t withhold anything. It went really well,” she said.

Mohawk Council press attaché Joe Delaronde, who is also an amateur seaway historian and ship buff, remembered a time when another ship was involved in an accident.

“It collided head on with a bulk freighter, middle of the night, between the powwow site and the marina,” he said. “It was a significant jolt and there was damage done to both ships.”

Monday’s crash happened about a kilometre and a half from that accident.

“Considering it’s a Norwegian-registered ship, which means it’s not here all the time, to be in an accident so close by is kind of coincidental,” said Delaronde, who was on scene in 2005.

“It’s not a common thing but if the engine shuts down and you have no power, you have no steering. It happens,” said Delaronde. “You might have manual steering but it’s not as easy to pull off, especially in a small channel where you don’t have a lot of time to react.”

It’s fortunate the ship didn’t destroy the relatively new docks across from the old radio station, he added.

“They replaced the old ones that were there since the seaway was built – maybe three or fours years ago,” he said.