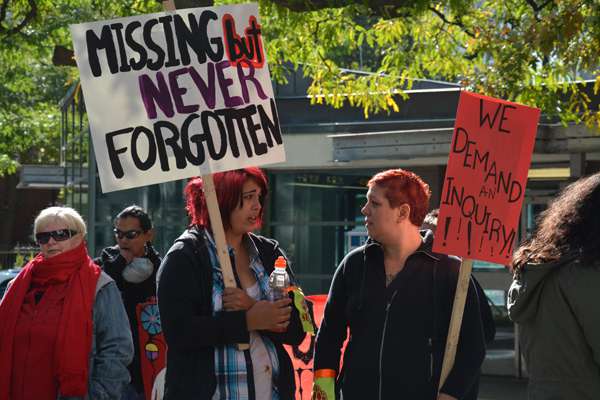 Ten years later, crowds marched through Montreal to attention to the tragedy of hundreds of Indigenous women and girls in the country who have been murdered or are missing. (Jessica Deer, The Eastern Door)

“We Demand an Inquiry.”

“All Women are Sacred.”

Kahnawa’kehró:non Sedalia Fazio of Kahnawake opened the 10th annual march and vigil for Missing and Murdered Indigenous Women (MMIW) on Sunday, with a healing song and a sombre tone. The Medicine Bear Song brought tears to the eyes and sniffles from the crowd of more than 500 people gathered at Cabot Square in downtown Montreal on Sunday afternoon.

“Let us pray that the powers that be open their hearts and minds and spirits and do something,” she said. “We can’t lose anymore. We’ve lost enough.”

It’s an issue that has come to the forefront of the Canadian federal election. Most of the opposition leaders are promising to hold an inquiry into MMIW if they are elected, while the Harper Government has refused to, despite the fact that more than 1180 Aboriginal women were murdered or went missing between 1980-2012, according to the RCMP.

Kanehsata’kehró:non Cheryl McDonald was holding a single feather and wearing red, a colour signifying violence and bloodshed against women. For years she didn’t think that MMIW applied to her family, despite the fact that her sister went missing and died in 1978 in Akwesasne.

“For me to admit that I belonged to this family was a huge step,” she said.

It took her 27 years to admit to herself that she belonged and her sister was a victim.

“She lived with violence and addiction,” McDonald said.

Now McDonald attends events to honour MMIW and her sister as often as she can.

The annual march and vigil has grown from 20 people ten years ago to just under 1000 this year.

Melissa Mollen-Dupuis, who works at the Women Native Community Development Centre in Montreal, hit the nail on the head when she told the crowd: “Sadly this is the 10th year we are here.”

Mollen-Dupuis went on to say that there is a 15 percent chance women born Aboriginal in this province are more likely to suffer violence against them than other women in Canada.

After the opening speeches at the square, a peaceful march went east along Ste. Catherine to Phillips Square where there were more impassioned speeches, as well as traditional music for the gathered crowd.

Danielle St-Laurent came to the march and vigil with her nine and 19-year-old daughters in tow.

They wore t-shirts saying: “My Generation is Here to Fight.”

“I come every year to bring forth the issue of Missing and Murdered Aboriginal Women and to make sure hopefully that there will be an inquiry.” St-Laurent said.

And she is setting an example for her girls.

“As a Native woman it’s my job to make sure that our life is a worth as much as any woman,” she said.

And that message is getting through to her 19-year-old daughter Danika.

“It means we are trying to get justice,” she said. “We may not be getting it but we are never going to give up until we have it.”

Twenty-two-year-old Kyle Patton of Kahnawake is a volunteer with Canadian Roots. He came because he has seen too much.

“The hard truth is that it’s happening in our backyard,” he said. “It’s close to home, the Tiffany Morrison case.”

Morrison, of Kahnawake, went missing nine years ago and her body was discovered near the base of the Mercier Bridge in 2010.

Patton’s volunteer work brought him to a First Nations territory in La Ronge, Saskatchewan. He says it’s even worse there.

“Living in La Ronge, from some nearby communities you see a case practically every other week. It’s crazy,” he said.

“I want to be there to do something,” he said “I couldn’t just sit there and be idle. I had to get my voice out there.”

Things are being done. Nakuset, the executive director of the Native Women’s Shelter of Montreal, has helped

She has set up a strong relationship with Montreal police and now, if an Aboriginal woman goes missing, there will be a point person who will coordinate with police, the family, and all of the relevant First Nations organizations.

Well known activist Ellen Gabriel gave an impassioned speech, and echoed the sentiments of nearly everyone in the crowd when she said: “How long do we have to ask for justice and freedom? It’s enough now.”