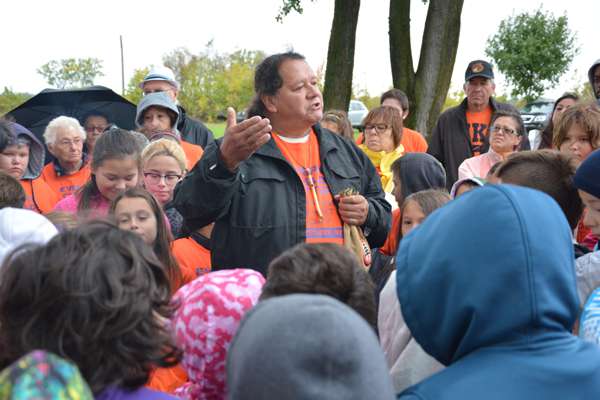 “We are suffering from a great sorrow, almost like death,” said Charlie Patton told the gathering of people who came to pay tribute to residential school survivors on Wednesday.(Steve Bonspiel, The Eastern Door.)

Local students came to the green space next to the old K103 Radio in droves Wednesday morning, a visual representation of the “Every Child Matters” theme of Orange Shirt Day, set up to honour residential school survivors and the little ones who didn’t make it home.

As did the adults, huddled near a fire where elder Charlie Patton burned tobacco, there to show support for the scant few Kahnawake survivors who are still alive today.

“Sometimes when they begin a tobacco burning, they will yell,” Patton told the crowd of close to 200, about the ceremony. “And that’s so everything in life will hear and open its eyes and wake up. We also have that power.”

Students, mostly from Kateri School, huddled around as the fire burned and the chilly wind blew mid-morning. Other local schools, such as Karonhianónhnha, held in-house remembrance ceremonies at the same time.

Patton’s English translation of his 15-minute Kanien’kéha opening was sprinkled with a little comic relief when he joked about Helen Jarvis Montour, the main organizer, forgetting to bring the wood to burn his medicine, causing a slight delay.

“Years ago when we went on fasts, they gave us eagle bone whistles. And they said that bone of the eagle, when he yells, that’s going to be that loud wail of his,” said Patton.

“And everywhere that sound will go, everything will hear the power of that eagle. So I brought that with me this morning so that eagle will yell and he’ll touch everything in the world.”

Patton burned tobacco “in the old way” through song, and he talked about the importance of proper condolence ceremonies dating back to the time of the Peacemaker 1,000 years ago.

“There is no one left untouched or who has not shed tears. No one who has not lost someone through this great sorrow,” he said. “We are all suffering from a great sorrow, almost like death. You can hear the sorrow in our voices.”

Patton asked the Creator to come to the people to help.

“All of these people who are here have felt this great sorrow and they’re of the mind we need to do something about this time and what has happened,” he said, of residential schools.

For Helen Jarvis Montour, whose father Frank went to residential school, her stomach was in knots leading up to the annual day, held on September 30 of each year since 2013.

She wanted everything to be perfect, but when a couple of minor things went wrong that morning, she rolled with the punches, lifted up by the support around her.

“I think it was excellent, with a good turnout,” she said. “It was a little windy and rainy and the balloon release didn’t go exactly how I planned but it was good,” she said of the mass of plastic inflatables that were given to children.

“I hope he’s happy and I really hope he’s proud of me,” Montour said of her father. “There’s a lot of happiness here and next year will be bigger and better.”

Orange Shirt Day started in BC after Phyllis (Jack) Webstad shared her traumatic story, one that transcends all Native communities.

In short, her clothes were taken away – including a beloved and bright orange shirt – which has come to symbolize the struggle all residential school survivors dealt with, including those who died or were murdered.

It is estimated 150,000 children went to residential school, with a rough estimate of 6,000 dying or being murdered at the schools across the country, which were in operation for over 120 years, from the 1870s until the last one closed in 1996.

“I grew up with my grandmother until I was 10,” Webstad, 48, told The Eastern Door. “The Indian Agent told my mother she had to leave the reserve. She was 20 at the time. She never did come back, only to visit.”

Webstad attended the Mission School for a year in 1973/74 at six years old, and she refused to go back to residential school once she came home – her community of Dog Creek, two hours away, also had its own school by then.

“No one on the reserve had vehicles,” she said, “and everyone used wagons and horses.”

“At six years old you’re excited to go to school, getting on the bus with all the others kids,” she said. “When they told me I couldn’t go home I thought what are you talking about?”

“It was just one thing after another,” she said. “I kind of shut down after awhile and thought okay, if I’m going to survive it’s up to me, there’s nobody there. I’ve carried that through a lot of my life and that’s why if something challenges me I’ll challenge it, to get through it.”

Her orange shirt was taken away from her, but it wasn’t the only thing. The rest of her clothes and the other students’ were thrown out, replaced by ugly, button-down shirts and tacky pants – which made her embarrassed to go into the schoolyard, devoid of any of her own clothes.

Coming from a small town, Webstad was used to baths, so when she was thrown into a shower and deloused, just the site of water “coming out of the walls” was “terrifying,” she said.

Webstad tells students she visits today to imagine staying at a friend’s house for 300 sleeps, not being able to see mom and dad – and it’s something that scares them.

September 30 was chosen because “that’s when kids were taken and it will give teachers time to plan something,” according to Webstad.

The idea stemmed from a local Truth and Reconciliation Commission event in which she shared the orange shirt story with her friend Joan Sorley, who in turn encourage Webstad to use it as a figurehead for keeping the conversation going on residential schools.

It soon went across the country and is now celebrated in most Native communities – two short years after it was launched.