You are here
Home > Sports > England arrives in Onondaga, passports in hand 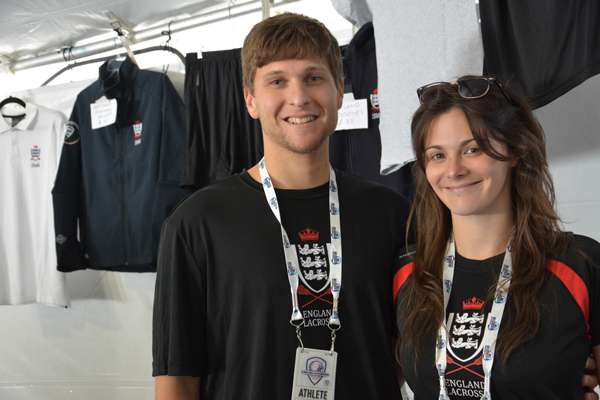 The United Kingdom’s refusal to allow the 2010 men’s Iroquois Nationals and 2016 U19 girls Team Haudenosaunee lacrosse teams into the country for their respective world championships did not go unnoticed by the players of the English squad currently playing in Onondaga at the FIL World Indoor Lacrosse Championship.
England, Australia, the Czech Republic and other teams’ players went to the Onondaga Nation Office and had their passports stamped by the nation before play began on the territory last Friday.
“(It was) to respect your sovereignty, really, and it was just a really cool thing to do,” said English defenceman Alan Keeley. “It’s a great honour to come and play where the game was created.”
The England lax team also wanted to separate the game from politics.
“With all the things with the visas and stuff, we thought to do the right thing and come over here and get our passports stamped to show it wasn’t us as a lacrosse team that didn’t let the Iroquois come over in 2010. It was the government,” said Keeley.
The players on the 2010 squad harboured hard feelings for years at not being able to participate in the games that took place in Manchester.
“Everything that we interpreted from it was that England was singling us out,” said Ron Cogan, who was part of the 2010 squad. “It was kind of a personal shot against us. We were kind of bitter about it towards England for a long time.”
Cogan said there remain some hard feelings toward England and he was happy to see they made the gesture.
“That was good on their part,” he said. “It was a nice gesture on their side.”
The U19 Team Haudenosaunee was also forced to withdraw from the 2015 Rathbones Women’s U19 World Championship that took place in Edinburgh, Scotland in July.
Other teams’ players took the English lead and had their passports stamped.
“It was just to get the whole experience of coming to the Onondaga community,” said Australian faceoff man Jesse Whinnen. “It was just to experience a bit of their culture.”
Canada’s players also did not arrive at the nation office to have their passports stamped, causing rumours to swirl about the team intentionally not doing it out of disrespect or for political reasons.
The rumours were completely false, according to Canada’s director of high performance and international relations Stew Begg.
“We don’t have politics involved with lacrosse,” said Begg. “It’s totally, totally removed from lacrosse. It’s all about the sport, and our athletes-centred base.”
The issue was one of logistics.
“We have our team schedule made up more than a month prior to and it’s always subject to change,” said Begg.
Canada arrived late Thursday night and had a schedule booked solid for the first three days leading up to its opening match Sunday night against the Iroquois Nationals at the War Memorial Oncenter in Syracuse.
“Our guys don’t have a minute to themselves,” said Begg. “We didn’t know about the passport stuff. All of that was kind of told to us at the last minute.”
When the team learned of the other teams having their passports stamped, staff contacted the nation office.
“Out of respect we spoke to the chief (Tadodaho), and he said, ‘not an issue. We have a treaty with Canada and Onondaga,’ and he understood and greatly appreciated us contacting him and letting him know,” said Begg.
Begg played in Akwesasne and has spent time on the Blood reserve.
“I totally understand, appreciate and participate in all the Native culture stuff, and I have the highest respect for Natives and their culture and goals for life,” he said.
Many of Canada’s players play alongside Haudenosaunee and other nations’ players, and have developed friendships within the lacrosse community.
“All of our Canadians have great friendships with all the Native players…. Whenever we first meet, there’s always the hugs. We’re all a family, and it’s a lacrosse family and that will never change,” said Begg.