You are here
Home > News > Tewa board nomination protest gets ugly, cops called 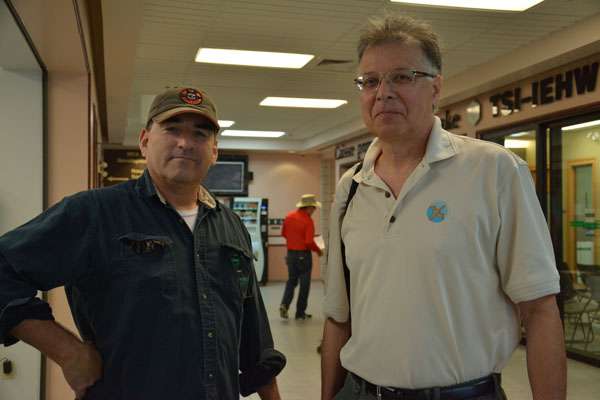 Saturday morning’s nomination period for the Tewatohnhi’saktha board of directors’ election didn’t quite pan out the way electoral officer Timmy Norton envisioned.
“As far as was what my job was, to get nominations, it went very well,” said Norton, “as far as the other stuff that went on, well, it was very unfortunate.”
Not only did a small protest take place at the nomination site by former board member Michael Rice, but a heated argument between Norton and one of the protesters led to the Kahnawake Peacekeepers being called to the premises.
Rice stood in the lobby at the Kahnawake Services Complex informing nominees that he was protesting the entire election process.
“I’m protesting, first of all, that my position is up for election. I’m on the board. How is the position up for election when I’m on the board?” said Rice.
Rice was removed from his position at the end of February this year. Board chairman Lionel Jacobs said at the time that Rice had “breached the trust of the board of the directors.”
“They threw me out because I didn’t comply with what the rest of the board wanted me to do and I was being accountable,” said Rice, “I want a further review of the organization.”
Rice put letters in the mailboxes of community members earlier this summer stating that “the MCK had not gone far enough in their assessment and corrective measures.”
He feels that there needs to be independent operational and financial audit of the Continent 8, Onkwawista Holdings and Mohawk Internet Technologies
Just under a dozen supporters accompanied Rice at the small protest.
“I believe Michael is correct when he put out the information regarding the inconsistencies regarding the finances for Tewatohnhi’saktha and the need for an audit,” said Jeremiah Johnson.
“I don’t believe he should have been removed. I think he was removed because he didn’t go with the flow of the table and they didn’t like that,” said Johnson.
The protest turned heated after Norton called one of Rice’s supporters a derogatory term.
Wahienhtha Karen Jacobs approached Norton for documentation relating to the election process.
“I went over to ask Timmy for the documentation, so he gave it to me and also wanted to explain to me something; why he doesn’t want us to cross the line,” said Jacobs.
Earlier that morning Norton asked protestors to not stand directly in front of the nomination table.
“I didn’t want that, because there’s private information. People put down their band numbers, phone numbers and I have to protect the integrity of the nomination area,” said Norton.
As Jacobs walked away from the table, Jacobs announced to the other people standing in the lobby that she was just called a bitch.
Another protestor asked Norton to apologize and a heated argument quickly ensued outside of the building until the Kahnawake Peacekeepers were called.
Norton said he felt intimidated after he was approached.
“I lost my temper, for sure, and I was treated very rudely by one of the people, but I did apologize to all the people around there and to the specific person who I was rude to,” he said.
“I’m kind of sad it came to this. I told people ‘hey, let’s be peaceful’ because they are going to use it against us and everybody knows that I’m not a violent person,” said Rice.
Despite the incident, nine community members were nominated for the five positions available on the board.
Virginia Standup, Jackie Leclaire, Ronald Guimond, Greg Horn, Frank McComber, Peter Lafleur, David Montour, Barton Goodleaf and Karrie Lacroix confirmed that they would all be running for the five seats open on the board.
The nominees still have to be verified by the Mohawk Council of Kahnawake on their business authenticity, which will take place on Monday’s duly convened council meeting.
Eligible candidates must be listed on the Kahnawake Kanien’kehá:ka Mohawk Registry and must have run a business for at least three years.
The elections will take place on Saturday, September 26 in the lobby of the Services Complex from 9:00 a.m. to noon.